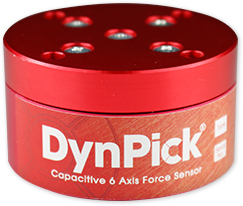 The Dyn Pick is a capacitive force sensor that can detect forces (Fx, Fy, Fz, Mx, My, and Mz) in six directions simultaneously. This WDF-6M is a miniature force sensor that is widely used by research institutions and universities. For miniaturization, the microcomputer adopted in the sensor has been downsized, and also WACOH-TECH’s original stopper mechanism has been simplified.

USB output is made because usage with a personal computer is assumed.